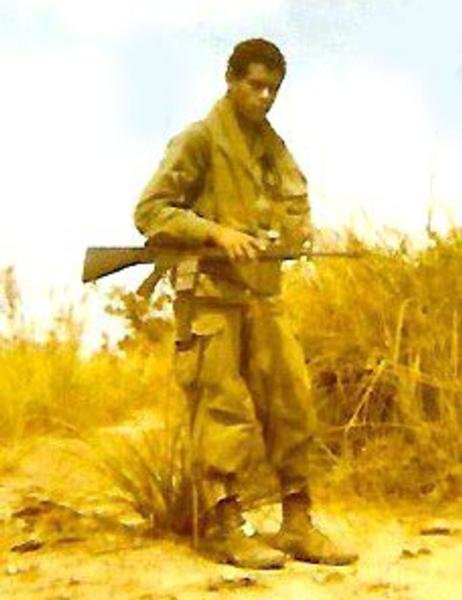 The President of the United States of America, authorized by Act of Congress, July 9, 1918 (amended by act of July 25, 1963), takes pride in presenting the Distinguished Service Cross (Posthumously) to Private First Class Reinaldo Rodriguez, United States Army, for extraordinary heroism in connection with military operations involving conflict with an armed hostile force in the Republic of Vietnam, while serving with Company C, 1st Battalion, 27th Infantry, 2d Brigade, 25th Infantry Division. Private First Class Rodriguez distinguished himself by exceptionally valorous actions on 15 January 1971 while serving as a member of a reconnaissance platoon during operations in Long Khanh Province. As Private Rodriguez’s platoon was reconnoitering the area, they encountered a well-entrenched hostile force firing automatic weapons and rocket-propelled grenades. Observing that an allied machine gunner was wounded and unable to defend his position, the private crawled forward to the gunner’s location and began placing devastating volleys of bullets upon the hostile force. When an enemy sniper began concentrating accurate fire upon the allied defenses, Private Rodriguez exposed himself to the foe and silenced the belligerent with a well-aimed burst from his M-16 rifle. While he was in this open position, the private was wounded in the flurry of bullets. With enemy rounds striking all around him, Private Rodriguez disregarded his own pain as he felled another sniper. His platoon was running perilously low on ammunition and began to withdraw to a resupply point. Voluntarily, the private remained at the rear to provide cover fire for his comrades. Suddenly, an enemy rocket-propelled grenade impacted just meters from him, inflicting additional wounds. Despite his weakened condition, Private Rodriguez continued to maintain suppressive fire upon the adversary until he was wounded a third time. Although evacuated immediately to the rear medical facilities, Private Rodriguez succumbed to his wounds in the early morning hours of 16 January. Private First Class Rodriguez’s extraordinary heroism and devotion to duty, at the cost of his life, were in keeping with the highest traditions of the military service and reflect great credit upon himself, his unit, and the United States Army.

I will always place the mission ﬁrst.

I will never accept defeat.

I will never quit.

I will never leave a fallen comrade.

Partner with us in our new Initiative "Da HOPE" to help those in need.